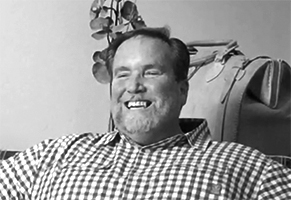 At present, Tim feels grateful and fulfilled. He’s excited for further opportunities in the future, and he is making the most of every day. “If I could say anything to myself two years ago, it would be, ‘Just wait to see the opportunities that are going to be available to you. Don’t give up.’”

Tim believes that the opportunities we are afforded are only as good as what we choose to do with them. He hates complacency, and is moving forward, making great strides in making his world wellness-centered. He is proud of his home, and enjoys giving a tour of it, pointing out some of his favorite spots like the backyard lanai, with views of lush tropical greens and the expansive Florida sky.

Tim’s a morning person. “I’m an early riser. One of my favorite times is sitting out on the back patio, with my coffee and the paper, and thinking about what I’m going to do that day. That’s my favorite time of day. I have that time to myself, because the other guys don’t get up for another half hour to an hour.”

He grew up in Philadelphia, Washington, DC and, from the fifth grade on, Orlando. He and his brother were involved in many sports growing up. Tim’s passions were tennis and swimming. “Butterfly was my stroke. It came so easy to me for some reason. I started when I was young. I won all sorts of medals, ribbons and trophies. But it took me the longest time to learn how to dive. So it was always me doing a belly flop – but I would still end up winning.”

That perseverance is woven throughout Tim’s life views and goals.

“Four years ago, I lost both my parents. But prior to that, I had an extremely close relationship with both my parents. Growing up, my mother was always there to help guide and support me. My dad was too, but my mom was always, always there. When she took sick [with cancer], she didn’t want to be around many people, and show her vulnerability of being sick. I gave no thought to it – for two years of my life, all that mattered to me was being there to take care of her, and being there for her. I am very proud I was able to do that.”

“When I moved into this Dave’s House nine months ago, I felt so positive and so excited. I remember taking the tour through the house for the first time. It is such a great house. And it is such a great opportunity for me. This May marks two years since I’ve been in Lakeside’s programs. There was a major life event that brought me to Lakeside on May 4, 2013, and now we are sitting here two years later. I remember them saying it was a two-year program, and it really is.

“Two years ago, I was basically homeless. I started the program, but you always have this little bird on your shoulder, saying ‘two years, two years’ – the self-doubt that I would succeed or not. I developed a strong friendship with a roommate of mine while there, who is a really, really great guy. I remember him, some of the other guys and my Peer Specialist talking about Dave’s House. It was remarkable how some things work out for you. So then this place became available. I talked to the other guys. I put a lot of thought into it. It was a clear-cut decision – of course, this is where I belong. And I have been here ever since.”

For the past two months, he spends one day a week at Recovery Place. He volunteers four days a week at The Center in downtown Orlando, which strengthens the intellectual, physical, social, emotional and spiritual well-being of its clients through programs and services.

He has developed a good rapport with his three roommates, and they all contribute to making their Dave’s House a success. They take a lot of pride in their home, and it shows – it is pristine, comfortable and welcoming. While they each tend to do their own cooking, as they all have different tastes, they enjoy talking on the patio, watching the news together and playing a game of ping pong with each other.

The underlying security of housing helps Tim tremendously. “Part of my issues that I struggle with are anxiety. It surprises me how safe I feel. There’s nothing on my shoulder saying ‘two years’ – I don’t have that anymore. We put a lot of effort in keeping the house the way it is. I like to buy things for the house, because this is where I intend to be. This works the best for me. It is very well-balanced.”

One of the best aspects of his home is the neighborhood. Tim has gotten to know several neighbors, some with four paws. “Oliver is one of the dogs down the street. When his owner is out doing yard work, he is out there with him. When I go to and from the bus, he basically knows what time I get home, and is in his yard, ready to greet me. I’ve taken him for several walks around the neighborhood. It is such a friendly neighborhood. When I leave for work at 7:45, everyone else is leaving for their jobs too. Everyone has their garage doors open, and you feel like a politician because you are waving hello to everybody. It’s great, everyone throws up their hands and says ‘good morning.’”

Tim is optimistic about the future. He wants to continue seeing his Recovery Place family. He wants to develop further skills in helping others through his volunteer work. He and a roommate are planning to join Planet Fitness, and support each other’s efforts to lose weight – “We can give each other momentum to succeed.”

He is moving forward, with a solid foundation of love and support at his Dave's House home.

Get the latest information on our Soiree here.